The Curve for Gauss

Curve for Gauss is a title which leans against widely used model (in statistics and other sciences) of Gausses curve, i.e. normal distribution. Basic idea is that the results of measuring of some property will be organized around the average value in the biggest part of a population.

Those who do not belong to that middle part of distribution comprise “not controlled” minority (those who have high or low results on controlled value, i.e. property). The play raises the question if those parts of the community are the ones that bring “disarrangement of average quality”, in other words, life itself. The play Curve for Gauss is the process of decomposing of our understanding of social phenomena where border (extreme) and average values are treated as equally important, where a specific is put aside a general quality, where the wholeness of a picture (no matter how imperfect the picture is) stands next to the precisely described parts, where without accepting the pain, the beauty is impossible… Except in Serbia, the play was performed in Bosnia and Hercegovina and Montenegro too. 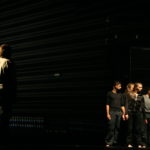 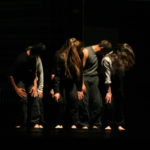 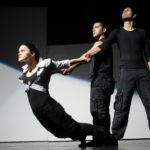 The play „Curve for Gauss“ is part of the „Body Frame“ project, which the Group “Let’s…” started in June 2008 and includes performing artists with and without disabilities. The performance was created as a result of their joint work.

The main fascination in this play is the way at which the dancers with the disability mastered their own body and sensed the inner rhythm of the group, the way at which, although incapable of hearing the music, they understood and sensed the minute impulses, syncope, accents in ensemble dance. Choreographers Boris Pešikan and Sanja Krsmanović Tasić, with the ardent help of dance pedagoguer Dejana Budiška, thoroughly premeditated and skillfully directed every motion. The result was very strong emotional tension, but without traces of pathetic. Blind performer Sveglana Gogić, who sang on the scene dressed in multicolored crinoline dress brought intriguing dose of staginess in that stripped bare dimly lit space, so her appearance gave to the group necessary drama and poetics. Curve for Gauss is delicate, in some moments moving play, which is not in the slightest moment only part of the political correctness or some trends (this kind of projects are very popular in the Western Europe), but proof that dedication, investigative spirit and devotions to the theatre, in all its forms and at all its levels…