There comes a time when a society chooses death, without a clear idea what has happened. Psychoanalysis maintains that Thanatos (death drive) is at the root of such desire to let go.

In mythological accounts, Thanatos (the god of death) was depicted as a winged boy or a young man with a heart of iron and black wings, often carrying a butterfly. Is the dance with Thanatos a constant of our lives or is there hope that we are able to refuse that dance and conquer darkness? 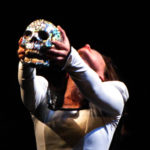 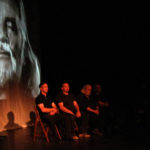 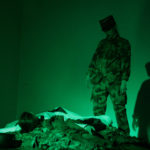 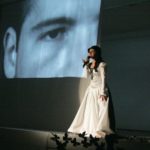 The play „Thanatos“ is part of The Day After (Dan posle) project launched by the Group „Let’s…“ (Belgrade) and War Trauma Centre (Novi Sad) with the aim of stimulating dialogue between young artists and veterans who returned from the wars waged from 1991 to 1999 and consequently dialogue with the wider community.

… When the stream of life brings war veterans LJudevit Kolar, Miodrag Tasić, Novica Kostić and Željko Vukelić to expose their war suffering with reference to the most distressful personal experiencing of Thanatos’s hell, then genuine drama ensues, the one which shakes the spirit, steer emotions and open the door of rebellion against pain and sorrow brought by black butterfly wings, and by which the essence of humanity is destroyed…No matter whether you as a young spectator, at that moment (and those were the majority during the performance in the Rex theatre), or in an early childhood, then as mature, experienced ominous and destroying power of war, you must be touched (which is expected), but at the same time surprised (which is not expected) as those battle-hardened people utter their monologues. Their sincerity/frankness, calmness, suggestibility, all which cannot be learned in any drama school, make us to forget where we are, the word to froze inside us, as well as thoughts that we would say them as a praise. Consciously and with hope, however, we except their final opening of the door, to expel impulse of death, and to bring a few tears with us in a rainy night, as well as a knowledge that this kind of physical theatre can make better a lot of thing outside and inside us …